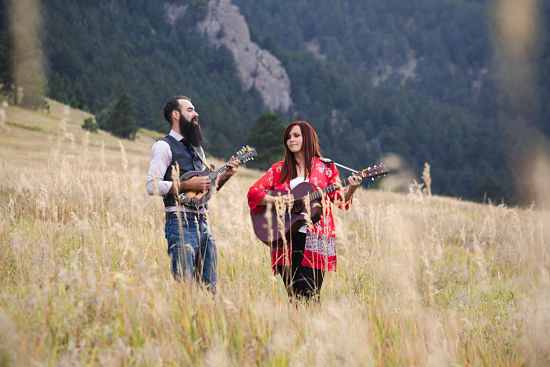 There’s something about the bend of the mandolin, the rustle of the guitar, the gale-like wave of the vocal melody…, that calls you to adventure.

Songwriting duo Emily Burns and Aaron Markovitz have always been adapting. The two Michiganders met as individual music makers in the blues open-mic circles; then they studied their craft together in California, and wound up taking to the seas to cover Top 40 hits for a cruise ship’s dance hall. After that, they started a southern rock-inclined, neo-country quartet, called Escaping Pavement. But most of their fans started finding them after 2014, when they kept their intrepid-sounding name but pared down to just a duo. With just their voices, an acoustic guitar and a mandolin, they wrote and recorded an album (The Night Owl) that was heavy on melody-slung Americana and rollicking, twangy ballads that attained a radiance through their magnificent harmonies. Now, they’re adapting again, this time as Road Warriors.

Road Warriors: … we don’t mean that in a Mad Max sort of way…,, but it’s nevertheless a fitting title for their new EP. It’s been a year of discovery and progress for Escaping Pavement as they’ve entered this next phase.

They played nearly 150 shows in 2018, mixing high-profile slots like the Southeast Regional Folk Alliance with more intimate engagements inside domestic abodes, all the while meeting and connecting with a range of wonderful new fans. They covered 60,000 miles, 28 states, and headlined six sold-out shows, including playing to their biggest audience to date. But with Burns and Markovitz both being John Muir-like romantics for the majesty of nature, they were absolutely thrilled to perform at the Zion Canyon Music Festival in Springfield Utah, right at the entrance to Zion National Park. It quickly became one of the highlights of their year.