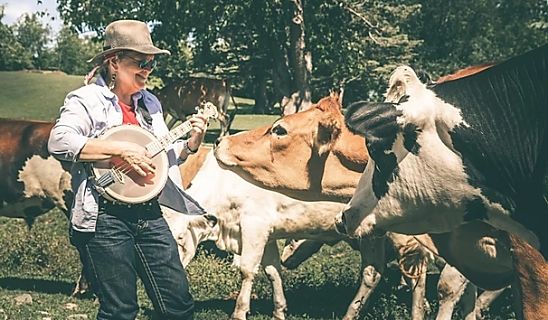 She was Born and Kept Going After That.

Lauren Crane grew up meandering along the Lake Erie shore, counting dead fish, stacking bottle caps, swinging from vines hollering like Tarzan, checking out Jane, enjoying the forbidden fruits from her neighbor’s pear and plum trees, catching snakes, pollywogs, toads, and hell. Her ears were filled with the sounds of crashing waves, crickets, mosquitos, Baptist hymns, Negro spirituals (term used with historical respect), the Beatles, Roy Orbison, Billie Holiday, Simon and Garfunkel, Saturday afternoon’s Texaco Opera, her mom’s Glenn Miller and her dad’s “Hillbilly Music.” These are the sonic influences that run like a streaker through the stadium of her mind.

Lauren’s music, which can be fat with bumblebees, soft as a peach about to go bad, or as preposterous as a “flesh” colored Crayola may also be described as saucy, sexy, sardonic or any number of alliterative adjectives that one with too much time on his/her/they hands could care to string together. Her oft-bluesy delivery and lyrics that stick in your head like wet sand, tell stories that can unwind like a lazy summer day or sneak up on you like a Barcelona pickpocket. All created with an ulterior motive: to entertain.

Whether it’s the murder and extortion in Old Washer Woman, the Bovine love of Irene, or the smoky Mama Got Big Thighs, Ms. Crane’s songs seem to possess an old and enduring soul. Though sometimes they possess a soul that’s more new and yielding. It depends. However, they don’t possess a soul like in The Exorcist or Rosemary’s Baby or anything. No. Way less Satan and way more magic–since it seems she’s always got something up her sleeve.

​P.S. She also loves the simile.